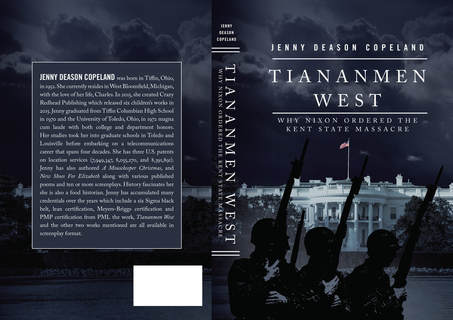 ​January 2018 MENSA Bulletin Book Review by Caroline McCullagh (with slight contextual modifications)
Jenny Deason Copeland turns her attention to the homefront during the Vietnam era. Copeland is an independent scholar, fairly common among Mensans, I think, with a long interest in the Kent State Massacre. On May 4, 1970, members of the Ohio National Guard fired live ammunition at unarmed student protesters at the Ohio university, killing four and injuring nine others, some of whom were only observing the protest.
​Copeland's education is in psychology not history. She accepts as a given the notion that President Richard Nixon ordered the massacre, citing the 1990 reissue of his memoir, RN in which she interprets an admission of guilt from the disgraced pol. Copeland is seeking a motive for him doing so. With Freedom of Information Act requests, she opened many formerly classified government records to citizen review. Copeland has a definite point of view on what happened, which she admits up front, so consider her perspective accordingly.
​With the massacre's 50th anniversary about two years away, ample retrospectives loom. Now's your chance to get ahead of the curve in beginning to understand this American tragedy.

​More Descriptions of this work
Jenny Deason Copeland details her theory that Nixon was in direct control of the event and the research she used to shed light
on that theory in this just released book.

The Kent State Massacre occurred on May 4, 1970, at Kent State University in Kent, Ohio, and involved the shooting of unarmed college students by members of the Ohio National Guard. It’s reported that 67 shots were fired over a period of 13 seconds, resulting in four deaths and nine people being injured. Following on from the shooting, a large national response ensued, with four million students striking and hundreds of universities closing across America.
In Nixon’s 1990 edition of his autobiography, RN, he admits to being totally responsible for the event which was ordered by him. His motive though was framed in nebulous terms, “for foreign policy considerations”. This book pieces together a plausible theory of what the details of that motive might have been.

“Tiananmen West: Why Nixon Ordered the Kent State Massacre,” encompasses decades of research by author, Jenny Deason Copeland, in hopes of replacing conspiracy theories with facts. The FOIA(Freedom of Information Act) requests some interesting new perspectives of not only the Kent State Massacre but how the mind of Richard Nixon could justify such an event. The book ends with a call to action that, if followed, might prevent the U.S. from ever allowing an unfit President to obtain the office again. The evidence presented in the book suggests that Nixon was insane while in office. It also buys into the theory of others that Nixon acted like a Mafia boss. He was a man in charge of a homicidal reign unmatched in America’s history. It also suggests that his purpose for the Kent State Massacre was to help him end the Vietnam War using one more of his homicidal, disturbing, psychological twists. In the end, four innocent college students lost their lives. But in the mind of Richard M. Nixon, the ends justified the means.

“Tiananmen West: Why Nixon Ordered the Kent State Massacre,” and Vietnam War era historian Copeland explains what happened at Kent State, and then delves into the mind of Richard Nixon to divulge evidence on two topics: Could Nixon have ordered the massacre at Kent State? And his possible motives for doing so. The research behind the theory that Nixon ordered the massacre has covered 30 years and included Freedom of Information Act requests to the FBI, CIA and NSA. The repercussions of this research to the author and her family will also be revealed. The screenplay titled “Tiananmen West” has been shopped around Hollywood.

Some of the students who were shot had been protesting the Cambodian Campaign, announced by President Nixon on April 30. Others were not at the protest, and had been observing from a distance. Several conspiracy theories surround the episode, with some believing the shooting was ordered and some suggesting the guardsmen themselves could have been shot at and were simply retaliating.
###
About Author
Born in Tiffin, Ohio as the second eldest to a family of four girls. She is an author, historian, and owner of Crazy Red Head Publishing. Copeland has published two children's' books, “New Shoes for Elizabeth” and “A MouseKeeper Christmas: The Beginning.” She is a graduate of the University of Toledo and has an almost 40 year career in telecommunications as an engineer and project manager. She has a Six Sigma Black Belt, is LEAN certified and has a PMP certification from the Project Management Institute.